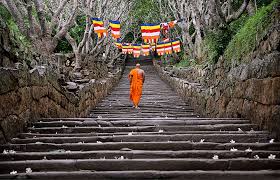 The Sinhalese are the only ethnic group that evolved in the island nation with a distinct language & culture sealed further by the philosophy of Buddhism. The invaders from South India & the 3 western invaders targeted these pillars to  destroy the nation. This requires the nation to preserve and protect what holds it together. All governments have failed to fulfill this duty given to them.

The 3 colonials had a better plan –

The baton of pretend-governance was handed over by the British in 1948 to the kalu suddas belonging to English educated elite (Sinhala/Tamil/Muslim).

They were tasked to denationalize the masses firstly by promoting western attire, norms, western values, behaviors & thinking & thereafter to look down upon the Sinhala Buddhist culture, language & make them feel inferior.

The reversal of the historical discrimination expected from them did not happen.

Denationalization can only be solved by decolonizing the minds of our people.

Sinhalese were trapped by the language card in 1956 which was used to justify federal set up a step away from separatism. The bigger picture behind this action was to ensure Sinhalese language was not given a due place even after independence. Thus, Sinhala Only was turned into a political card against Sinhalese.

11% Han Chinese makes up the largest ethnic population in the world.

9.6% Scottish speak Scottish Gaelic is not an official language in EU or UK

20% Kurds in Turkey but Kurdish is not an official language. Speaking Kurdish is banned by Turkish law 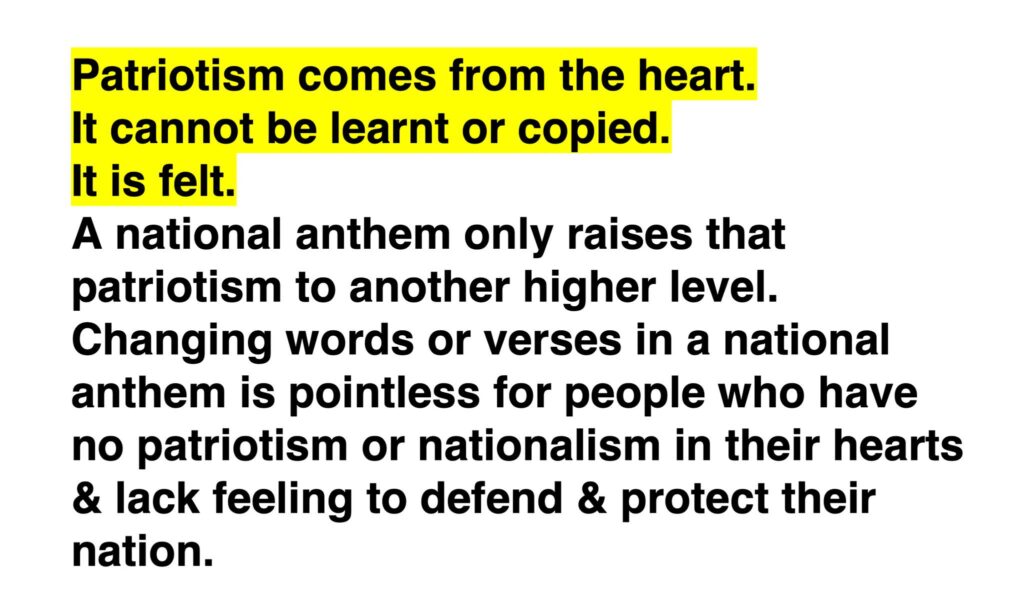 The national anthem is a creation by western rulers. It is meant to bring pride in the people, instill patriotism & nationalism. It revolves around appreciating the evolution of the nation’s history & feeling pride & determining to protect & defend the nation at all times. There is no point in having a national anthem & singing it without feeling one’s adrenalin pumping to serve the nation.

Which is why it is pointless plastering it as a cosmetic façade using a bogus ‘reconciliation’ term. The previous government violated the constitution to allow the singing of the national anthem in Tamil – did that bring the handful of separatists to give up separatism because the anthem was sung in Tamil? No. Therefore, nothing should be changed to satisfy a handful of people who only want to nitpick at anything to gain prominence by flagging issues.

The US, French & British national anthems have strict ties to their military – the French was used as a marching song for the army, God Save the Queen was to garner support for the King after military defeat & the Star Spangled Banner was written during the battle which expelled British from America.

Americans, French, British & every nation that sings the national anthem with pride, do so because they feel pride to be a citizen of their nation. These countries continue to commemorate World War victories going so far as to enact the battles. What hypocrisy when they denied Sri Lanka to celebrate defeat of LTTE by asking Sri Lanka not to indulge in “triumphalism”. This cannot stop people rallying round our troops in honor of their achievement. The is another attempt to degrade the right of Sinhalese.

Patriotism comes from the heart. It cannot be learnt or copied. It is felt. A national anthem only raises that patriotism to another higher level. Changing words or verses in a national anthem is pointless for people who have no patriotism or nationalism in their hearts & lack feeling to defend & protect their nation.

A national anthem does not require PR agents to promote or poster campaigns to garner support.Citizens who feel a sense of pride & duty will automatically rally round it. Citizens that don’t have no business to be demanding any changes because they are unlikely to feel pride or duty whatever verses are added.

However, it is the duty of parents & a government to instill national pride by teaching history at schools & using media to showcase the glorious achievements of our ancestors. No one has a right to devalue these achievements.

The national flag used by our kings served to defend the nation. The present flag has been tampered claiming “inclusivity for all communities” – did that happen? No … Another effort is being made to tamper with the national flag again – not with any intent to bring ‘inclusivity’ but to remove the historical place held by the Sinhalese Buddhist majority.

Every country has a majority-minority.

Both must respect each other, not try to overthrow the other & take their place. The campaigns to humiliate, laugh & ridicule the majority’s culture, heritage, religion, values are many. It only exposes their small-mindedness.

Multiculturalism serves a purpose for created countries without civilizational existence who have to be grateful for “immigrants” that helped build the new nation. Ironically virtually all of these created countries have suppressed the indigenous natives & their cultures yet promote “reconciliation” & “inclusivity” overseas. Modern Canada has a history of just 155 years (1867) having omitted the history of the aboriginal people who lived for centuries before French & British arrived & fought for 7 years to control the territory & France surrendered in 1763 & this land became British North America & thereafter Canada. The British settlers in now America fought the British in 1775 which led to the American independence.

Multiculturalism is the western twist to an artificial ‘unity’ controlled by them which requires people to erase their history & heritage and adopt a new form of western-imposed values.

Secularism is also a western-injected term to erase the socio-religious links of people to their religion & culture & heritage & instead live by terms dictated by the west. The West however does not compromise its Christian heritage in their currency/anthems/buildings/oaths etc. Islamic nations will never compromise anything.

The ploys and plots to erase a country’s national identity are many.

The majority has never said to deny or destroy the cultures or traditions of the minorities. Everyone must learn to respect the space of others. The trouble makers who incite both must be identified & defeated.

The only protective measure the Sinhala Buddhist majority have is in the duty tasked to every elected government to protect/foster & promote Buddhism/Buddha Sasana, primarily because minorities are heavily lobbied & protected by powerful & well-funded religious institutes/foreign governments & foreign funded NGOs.

The Sinhala Buddhists have only the government to protect their rights – unfortunately most governments succumb to pressure of the lobbies that advance only minority interests & eventually governments compromise only on the Buddhist space & this is how the place given to Buddhism has got diminished with every government in power.

Sinhala Buddhists are expected to keep silent & not oppose anything said against them. Highlighting any wrongs or discriminations to Sinhala Buddhists is taboo & anyone doing so has their opinion shut down by name-calling and this article too will be deemed ‘racist’ or whatever words they can pluck from the dictionary!