https://www.fhr.org.za(put a search for the name ITJPSL – all that appears is “sorry, but nothing matched your search items) There is something seriously amiss.

If FHR website does not mention ITJPSL – how can ITJPSL on its website claim that it is being administered by FHR & its Executive Director Sooka? (pl note that since 2021 the ITJPSL introduction has been changed. Below a screen shot of previous introduction is given as proof) 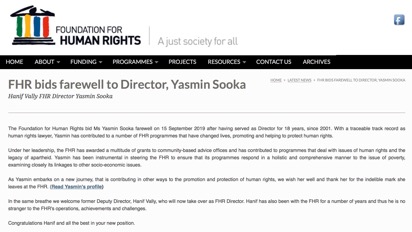 While Yasmin Sooka was paid to look into South Africa’s human rights as Executive Director, her time was obviously only directed to churning reports against Sri Lanka through the ITJPSL. From2014-2021 (7 years), the ITJPSL and Sooka has issued a record breaking 164 reports on Sri Lanka in English, Tamil & Sinhalese. How many reports has she issued on South Africa? Some South Africans should start counting!

Give her applause, what a magnanimous gesture!

These reports of Sooka’s are funded by powerful players – the 2014 ITJP report was funded by the British Foreign Office through the Bar Human Rights Committee of England & Wales. Funnily enough the majority of the 40 cited cases were former LTTE illegal combatants seeking asylum in UK. Please keep them, UK!

May we ask, what is the Truth & Reconciliation, Sooka has delivered to Sierra Leone or South Africa?

Sooka’s involvement with Sri Lanka has been as handpicked panel member of Ban Ki Moon’s personally commissioned Panel on Sri Lanka in 2011, co-authoring article against Sri Lank in 2012,

That became the stepping stone to be selected as a member of the Advisory Council of the Sri Lanka Campaign for Peace & Justice in which C4 Director Callum MaCrae was also member, along with a host of other anti-Sri Lanka personages – Basil Fernando, Bruce Haig (patrol of Centre for Peace & Conflict Studies) & J Tissainayagam.

So there was no surprise when she became ‘comrade’ to the Global Tamil Forum & invited as its Guest Speaker in 2013 to UK where TNA’s Sambanthan and Sumanthiran were also present. Sooka was the 2ndsignatory in a petition by the Sri Lanka Campaign for Peace & Justice in 2014 to which other signatories included Desmond Tutu, Bishop Rayappu Joseph (both dead), Sambanthan, Wigneswaran and 35 others. http://dbsjeyaraj.com/dbsj/archives/28557

Just as the EU, South Africa & Sri Lanka must provide answers, the Board of Trustees of Sigrid Rausing Trust must also explain why a Trust covering Balkans, Central & Eastern Europe, Former Soviet Union, Lebanon & Turkey, Egypt, Tunisia, Kenya, Zimbabwe & South Africa is funding ITJP Sri Lanka since 2014? Sri Lanka is in Asia, not in East or Central Europe, Africa or in the former Soviet Union! https://www.sigrid-rausing-trust.org

EU & Sigrid Rausing Trust by its association with the ITJPSL must have felt embarrassed when ITJPSL had to make an apology to Brig. Ravindra Dias for wrongfully using his picture claiming it to be Maj. Gen. Suresh Salley, the Director of State Intelligence Service. Maj. Gen. Suresh Salley is taking legal action against Sooka separately!

The Sri Lanka Foreign Ministry must take this up at diplomatic levels with the EU, the South African Government and even withSigrid Rausing Trust.

EU funds come from EU Tax Payers, this money is not meant to be used for witch hunts by individuals or groups.